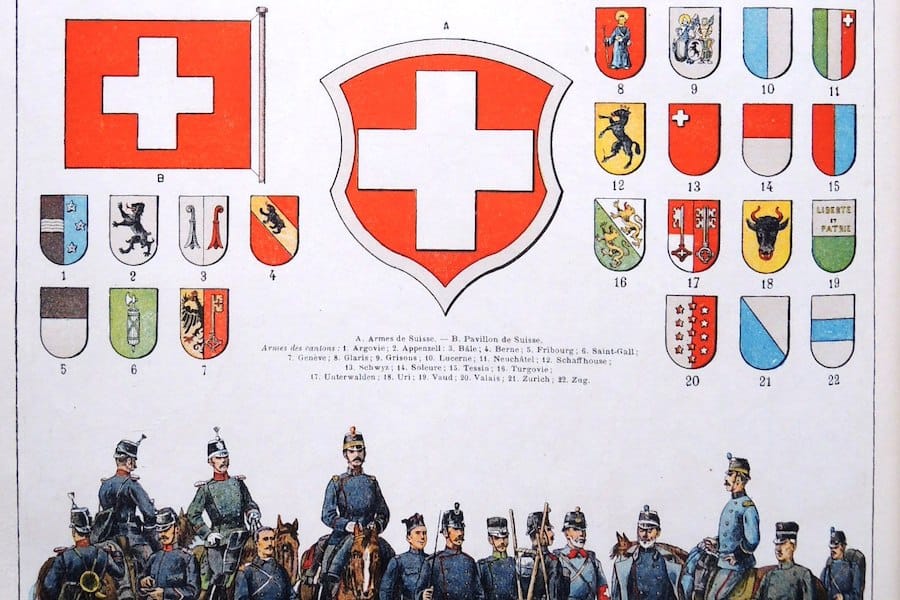 Yes, that is what the Victorinox factory at Ibach in Switzerland can produce in a day. These knives are exported to over 130 countries all over the world.

But does the Army of Switzerland actually use any of these knives?

The Switzerland army uses the Swiss Army Knife model ‘Soldier’ as standard issue. At the beginning of service, each new recruit in the Switzerland Army receives this model. This model is often referred to as Model 08.

Interestingly, the Standard Issue knife is also subjected to inspection, and as such a recruit is required to keep his Swiss Army Knife clean and shiny.

In fact, the soldiers of the Switzerland Army have been using a Swiss Army Knife since 1891!

To date, the Swiss Army has remained the biggest customer of Victorinox for more than a century.

The First ‘Swiss Army Knife’ for the Switzerland Army

Contrary to popular belief, it was not produced in Switzerland or by any Swiss company. Wester & Co, a German company based in Solingen produced the model as per the specifications of the Swiss army.

The Model 1890 had a blade, a screwdriver, a can opener, and an awl. It had a wooden handle and measured 100mm in length.

In fact, Model 1890 was not known as a Swiss Army Knife back then. It was more commonly known as the Swiss Soldier Knife. But by all means, it was the first multi-purpose folding knife issued to the Swiss soldiers and is the ancestor of present-day Swiss Soldier’s Knife 08.

The inspiration for the first multi-purpose knife for the Swiss army dates back to the 1860s when the army used Vetterli rifles.

For proper maintenance of these rifles, one had to carry a set of tools commonly known as ‘Vetterli tools‘.

By 1889, the Vetterli rifles used by the Swiss Army were replaced with Schmidt-Rubin rifles.

For servicing and maintenance of these rifles, the soldiers had to keep with them what is called a ‘Swiss SCHMIDT RUBIN cleaning kit‘. Especially, a screwdriver was required to disassemble these rifles.

Because of this, the army wanted a tool that could aid them in their day-to-day activities.

Purpose of multi-purpose knife for the Swiss army

As such, specific tools were included in the Model 1890 to address these requirements.

In 1891, Karl Elsener, a Swiss knife maker, secured the contract from the Swiss Army to produce the Model 1890 in Switzerland itself.

Karl Eslener’s knife-making company later went on to be known as Victorinox.

In 1897, Elsener improved upon the original model by designing a new folding pocket knife that employed two special springs.

To know more about Karl Elsener, read the History of Victorinox and the Swiss Army Knife!

This design enabled to have tools on both sides of the knife, making it more compact and functional.

This model was called the Swiss Officer’s and Sports Knife.  The model also included a corkscrew. The Swiss Army did not consider a corkscrew as an essential tool for survival. As such, the ‘Soldier Knife’ remained the standard issue in the army.

However, the soldiers as well as the common people were free to purchase the Officer’s Knife separately.  it was available for purchase in cutlery shops.

Later on, the dual spring design was incorporated into the Swiss Soldier Knife too.

The Soldier knife was also available for purchase individually for non-military use. As such, Victorinox devised a way for identification of the knife based on usage.

Evolution of The Soldier Knife: From Model 1890 to Model 08

The latest incarnation of the Swiss Army Knife model ‘Soldier’ or Model 08 is the result of many iterations and improvements over the very first model, the Model 1890.

Over a period of more than a century, Victorinox (along with Wenger) has designed and produced more than 400 different models of the Swiss Army knife. But the Swiss army has officially used only 8 of those models.

In fact, the Swiss army only issued updates to the official model when other changes in standard army equipment required new tools in the pocket knife. As such, major changes to the original design have been few and far between.

Out of these iterations and improvements over the original design, two design changes have been quite significant.

This model completely changed the look of the knife.

The 1961 Model was more commonly referred to as the ‘Alox‘ model, coined from Aluminium and Inox (stainless steel).

This model has remained the official knife of the Swiss army for 49 years! Presently, this model is marketed as ‘Pioneer Alox’ to the general public.

In fact, a slightly upgraded model, the ‘Pioneer X Alox‘ is one of the most popular Swiss Army Knife models. It adds an extra tool – a pair of scissors.

This model again was a significant departure from the earlier 1961 model in terms of looks and functionality.

This model is known as Soldatenmesser 08 or ‘Soldier’s Knife 08’. However, more commonly it is referred to as the Swiss Army Knife Soldier.

Though it was designed in 2008, The Swiss army officially made this model standard issue in 2009.

The current model has a black-and-olive-green combination handle.

The modified design has made the official pocket knife of the Swiss Army stronger, lighter, and more functional than any of the previous models.

All Swiss Army standard issue models prior to Model 2008 were produced by both Victorinox and Wenger. As of today, since Wenger doesn’t exist as a separate company, Victorinox remains the sole producer of Model 2008.

To know the differences between the Swiss Army Knives produced by Victorinox and Wenger, do read:

Other Armies that use Swiss Army Knife

The popularity and usefulness of the Swiss Army Knife have made many other countries adopt some variant of the Soldier Model 08 as the pocket knife of their armed forces. The variations often include slight changes in the tools and a stamp of the army of that country on the scales.

Victorinox is the official supplier of pocket knives to the military of the following countries:

Well, today Elsener’s company Victorinox is the official supplier of the pocket knife that the German army uses.

The Swiss army has been using some models of the Swiss Army knife for more than a century.

The armed forces will probably go on approving a Swiss Army Knife as standard issue for the foreseeable future.

The official pocket knife of the Swiss Army

In fact, many Swiss soldiers carry two Swiss Army Knives. One issued by the army, and another that they actually use. This way they can keep the official one clean as it is subjected to regular inspection 🙂